Saturday started off being a mostly cloudy but nice day. While Heather and the kids were getting dressed, Alec and I headed across the street to one of the local Starbucks to bring back coffee (I won’t drink hotel room coffee). I paid cash, and when I exclaimed, “Oh, cool. The two dollar coin,” I probably displayed some of my tourist-ness.

We headed out a little before 10 am (we are on vacation) and went to Sophie’s Cosmic Cafe for Breakfast. 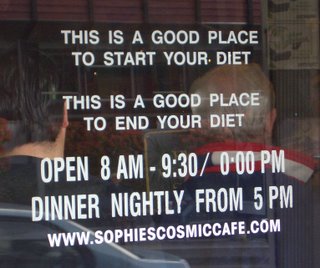 We easily found parking a block away, used my $2 coin to pay for parking and walked up the street to the restaurant. There were people clustering in and out the door, so we felt okay about where we were.

It turns out that they don’t take names, but just form a line. The girl at the door told us it would be about 15 minutes for my (home) Party of Five. We hung out on the sidewalk waiting our turn; smaller parties were seated quickly. About 10 minutes into our wait, another party with five people in it came. As our kids would range on the sidewalk, when the ?manager? came out, he looked at the other group and asked them if they were the group of five that was next. We spoke up that it was actually us and were seated shortly there after. I’m not so sure about this line thing instead of names. 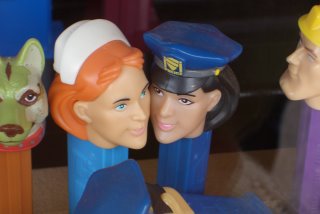 Sophie’s is a funky little breakfast spot with an outdoor patio. The walls are covered with old records, baseball pennants, metal lunchboxes and toys. It as the typical breakfast menu of eggs, pancakes, waffles, eggs benedict (my choice), but no kids menu. It was recommended as a good place to take kids, but I think that was due to the funky décor. They did give us crayons to color with, though. 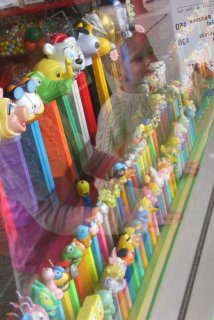 Heather ordered French Toast, Parker and Chase, waffles, Alec, Kit’s breakfast with bacon, eggs and two pancakes and I got Eggs Benedict. The food came quickly but wasn’t notable. The sausage that came with Heather’s French Toast was a very fine grind and had a different flavor. Neither of us found it very pleasant.

Overall Review: Sophie’s is a funky breakfast spot, popular with the locals, but the food isn’t so great. Eat there for the funky décor, but that is about it.

After breakfast we drove to Stanley Park – kind of like the Golden Gate Park of Vancouver. It was a nice park, lots of people biking, running and roller blading. We didn’t stop and drove through the park. People in Vancouver seem pretty fit and fashionable.

You could see across the water to the shipping docks in North Vancouver. There were brilliant colored piles of sulfer and shipping containers. We didn’t stop, so I didn’t get any photographs, with the exception the one I took while driving.

From the park, we headed to Granville Island, 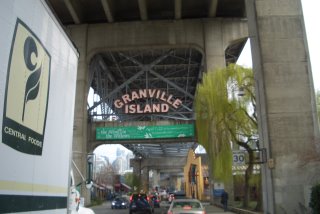 basically a giant public market. We wandered through there, ate a snack and I was able to take lots of photos of the foods on display. Every time we’d walk through the vegetable markets, I’d get waylaid by the colorful displays.
Parking was free, albeit harder to find. 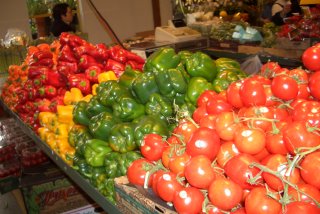 We took a roundtrip on an aquabus. These cute little boats take people all over False Creek. It is a pretty neat little public transit system. 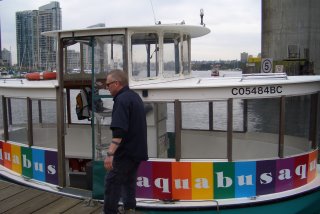 Overall Review: The market was just another public market – lots of stuff to buy but nothing unique. It was great for people watching, a bite to eat and photography. The aquabus was a neat way to see the waterfront and not too expensive. The micro tour was worth it.

We went to the Capilano Suspension bridge after that. We didn’t have any coin of the realm left, so Heather went to try to get change. Parking would have cost us $3 CA, but I found a parking receipt with time still left on it, so parking was free there too! Admission was steep and as I charged $60 CA, I was asking myself what exactly am I paying for? 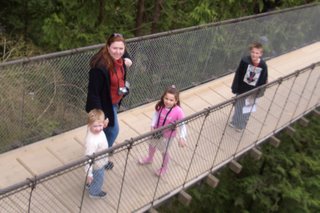 Sixty bucks to walk across a gorge on a suspension bridge? I’m cheap, so I wasn’t so thrilled. The park ended up being pretty nice and very well done. There were boardwalk trails through out the park, photo spots and all kinds of catwalks and suspension bridges through the trees. There were very nice displays of the history in the area. 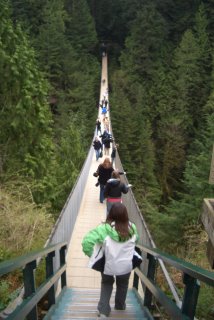 Heather doesn’t do well with heights and especially heights near our kids, but she did well with them.

Overall Review: Expensive, but worth it. Nicely done park and display of history.

We left the park at about 5:45 or so and decided to head to Shannon Falls in Squamish. A quick check on the GPS showed that sunset was around 6:58 pm, so we’d be able to get there before dark. The drive to the park was on the Sea to Sky Highway. It has an incredible view of the sound and the mountains and the road was very curvy. It made me miss my MINI. It would be fun for a long, international rally. 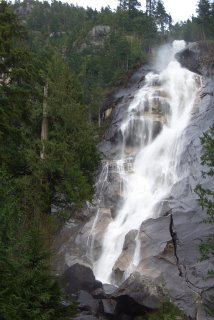 We drove in about 6:30 and the park closed (the sign said they locked the gate) at 7 pm. Heather checked the map and saw that the falls were pretty close to the parking area, so we decided that we would stay. Again, we had to pay for parking, but this time it was only $1 CA for an hours parking. You’ve got to pay for parking everywhere here!

The falls were very scenic and I was able to get photos before the sunset. I didn’t see how high the falls were, but I’d guess that they were in same area as some of the falls in Yosemite. This particular park had lots of trails too for day hiking.

Overall Review: Pretty nice place. Cheaper parking and it seems like a great place for a day hike.

It was just before 7 as we left Shannon Falls and decided that we needed to look for someplace for dinner. The navigation system showed that the Howe Sound Brewery was pretty close. That was the choice for dinner. 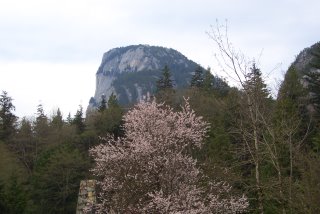 As we drove through the little town, towards the sound, we drove past lots of closed restaurants. There was hardly anybody out and we got worried that the brewery might have been closed. The Brewery is also home to a nice hotel. The pub was off limits to people under the age of 19, so we headed into the restaurant to eat. It was nicely decorated and the menu looked pretty nice.
We were seated and very promptly the kids were brought plates of vegetables – pretty nice thing for them – and a packet of things to color. Points for being kid friendly.

Heather ordered the warm seafood salad from the specials and iced tea and I ordered a Santa Fe Chicken sandwich with a side of ale and cheddar soup and ale. At the last minute, we added an appetizer of yammer jammers, yam french fries. They were probably the best part of the meal.
Heather didn’t really like her salad, some of the shrimp were canned and her iced tea was a fruity tea, which she doesn’t like at all. We ended up trading beverages, so I got to drive the curvy road back (which is enjoyable). My sandwich was bland – pretty far from Santa Fe, I should have guessed and my soup was forgotten.

Overall Review: The food wasn’t worth the trip from Vancouver, though the scenic views of the mountains around the sound make up for it. The food was surprisingly inexpensive.

As we left the restaurant, it started to rain (remember the forecast), and it rained all the way back to the hotel. We got back at about 9:30 and got ready for bed. Heather and the kids watched TV until it was quite late and I read some. I ended up forgetting to take out my contacts and when I did, I dropped one (but I didn’t realize it until the next morning).
Posted by Beau at 7:30 AM

Email ThisBlogThis!Share to TwitterShare to FacebookShare to Pinterest
Labels: restaurants

“Oh, cool. The two dollar coin,” I probably displayed some of my tourist-ness.
It's called a "Toonie" (to distinguish it from the $1 Loonie ;)