I've think I've figured out Starbucks grand, or should I say grande, plan. For years, I've maintained that Starbucks is great because you can get a consistent cup of coffee, just about anywhere. Recently, I've come to the conclusion that I want to consistently get great coffee. For me, this has meant independent cafes and brewing my coffee myself.

I brewed 248.6g of Nicaragua Laurina #coffee from 20.7g of beans with pour over. I couldn't quite pull as much of the lemon notes out as I got at the roaster. @starbucksroastery @acaiacoffee #singleorigin
A photo posted by Beau (@beauraines) on Mar 29, 2015 at 8:42am PDT

Starbucks recently opened their Reserve Roastery and Tasting Room, where they roast rare and small batch coffee beans. Its an experience because the tasting room is built around the roastery, you can chat with the roasters as they work. They sell beans that you'll only be able to find there, some of them even roasted the same day!  There are great single origin beans and some that come from a farm smaller than a football field.  Unlike a normal Starbucks, you can get your coffee from a whole slew of brew methods and if you find a new favorite, you can pick up all of the coffee gadgets you'll ever need (or want). 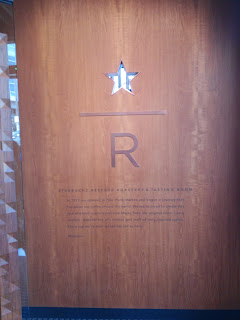 I've recently started seeing Starbuck's single origin beans at the grocery store. I've not picked any up because they've always been pre-ground and I know that is sub-optimal, but its getting the idea out there in front of consumers.

Last weekend, I was driving a carpool for swim practice and was in a shady neighborhood where the Starbucks is my hangout while waiting for practice to end. I was surprised to see that they had one of their espresso machines loaded with single origin beans from Kenya. They had little signs suggesting that people order their espresso drinks with the single origin beans. I decided to have a tasting and compare the espresso made with the two different beans. It took a while to get my order right, two single shots of espresso, not one double, but the differences between the two beans were incredible and easy to notice.

Having a #coffee tasting this morning. @starbucks is offering #singleorigin in their #espresso. Kenya vs. the espresso roast. Huge difference. Kenya #ftw
A photo posted by Beau (@beauraines) on May 16, 2015 at 9:24am PDT

At most Starbucks, instead of their drip coffee sits in the urn for up to 30 minutes, you can order a pour over. They'll use any of the beans in the store for it, opening a package from the shelf if necessary. At no additional cost compared to their drip coffee. It's definitely slower and does have an impact on the customer queue, but its one more way that Starbucks is upping the quality of the coffee that they make available.

Starbucks has been successful at getting coffee in front of almost all Americans and even convinced them to shell out big bucks for a drink with very little coffee in it. Now, with these introductions of better brew methods, distinct flavor profiles and single origin beans, they're working on stepping the American coffee drinker up to a better coffee experience. In the long run, this is great for coffee growers and the coffee industry. Its actually interesting from a business perspective where the big player in the industry is working to make the market better rather than just drive costs out.

Maybe its not a grande plan, but a Venti. What do you think?
Posted by Beau at 1:55 PM 3 comments: Links to this post