Yesterday was a rough day

Yesterday was a rough day. Not because of work or school or kids. I was out of coffee beans for my espresso machine. Barring one sip of my wife's drip coffee, I had none.

And though I claim not to be an addict, at about 11 am my head started to ache. As much as I tried to deny it, I knew it was from a lack of caffeine.

How could someone living in the greater Seattle metro area where Starbucks are so prevalant as well as many better, independent cafes, run out of coffee beans. That I blame on the day before. It was a rough work and school day. They two just flowed together with a brief family dinner in between.

I really intended to buy more beans, but at 9:45 pm I was ready to call it quits. I should have known better.

I bought beans last night and have enjoyed many an espresso today. Today is a good day - no work, not too much school and I've got coffee!
Posted by Beau at 2:43 PM No comments: Links to this post

Email ThisBlogThis!Share to TwitterShare to FacebookShare to Pinterest
Labels: coffee

Sync your iPod in Ubuntu with Virtual Box

I did it finally. I've been able to sync my iPod under Ubuntu. Now, I cheat a little bit and I use Windoze XP running in a virtual machine, but it works! This is the last hurdle for me to cross - managing my music under Ubuntu.

Virtual Box supports USB connections to the guest machine, but only with the non-open source version of the software. It is still free, though.

In order for the guest machine to recognize the device, you have to setup a USB filter. I'm not sure what you are filtering, but it makes it work. 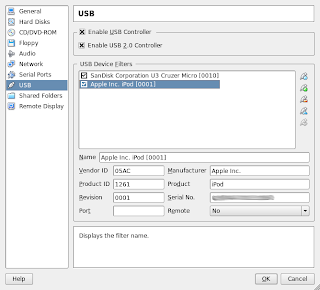 Once you have it connected to your virtual windows, the sync takes a while to start, but it really works.

Now, all isn't well. There is a known bug that some applications have problems writing to mapped drives from the guest machine. ITunes is one of these (Microsoft One Note is another); trying this causes a blue screen of doom. But I was able to get around this.

It is a little inefficient and takes up some more disk space, but it is much better than making a 40 GB virtual machine in order to store my music library inside. Now, with a little cheating, I can using iTunes Music Store and sync my iPod, all under Linux.
Posted by Beau at 3:56 PM 4 comments: Links to this post

I've been swamped of late and been unable to pay attention to this blog much. This quarter school has been intense. I've had lots of great ideas floating around that I wanted to blog, but I've never gotten them written down. I could use Jott, but I was hoping to make more substantial postings than 30 seconds allows.

Ubuntu Hardy Heron
I've almost switched 100% to Ubuntu, as I've posted before. There are a few applications that I run in a virtual Windows XP, but I'm loving linux. The OS is fast, stable and free. Recently (in terms of blog posting) I upgraded from version 7.10 to 8.04. I had all these great things I wanted to write about the upgrade process; but I can sum them up in just a few words - it was easy and seamless. As a newb, I was thrown by the fact that my kernel was upgraded at the same time, but I quickly figured that one out.

OpenOffice 2.4 was great, as it has enhanced support for Microsoft's XML document format, but I removed Firefox 3 beta 5 because prime time just wasn't ready for it. Developers haven't made compatible versions of lots of the plugins that I've come to rely on in my browser.

One of the funny things, as I was discussing this upgrade with my college room mate, one of my linux resources, I was upgrading to 8.04 from 7.10 and he was upgrading from 6.06 to 7.10!

Business School
This quarter has been very challenging from a time management perspective. Our two classes are almost entirely based on preparing case studies as a group, which is a big change from the previous quarters. It's take us most of the quarter to really figure out how to work effectively and we are still struggling somewhat. Its taken lots of really late nights (or early mornings, depending on your point of view) to get the work done.

Last week, my kids asked when I was going to eat dinner with them again (I wasn't there). My youngest had been keeping track, accurately, no less of how many dinners I'd missed because I was at school or working on case study with my group. Three more weeks and this quarter will be over.

Soccer Coaching
Yes, I'm coaching soccer again. This season is super low key - 5 kindergarteners playing 3 on 3 soccer. The goal here is to have fun and teaching the basics. I think I've been successful at that and I've been having fun too. I'm glad I was able to work this into my schedule and I think so was my youngest, too.

I can't promise much, but I'll try to keep up on this blog a little more. Maybe they'll be short quick posts, but I'll keep you in the loop!
Posted by Beau at 9:22 PM No comments: Links to this post

I noticed my college room mate online this evening and his IM status message was pretty funny.

I wonder how his ISP feels about him not paying.

And if his ISP is actually reading this, it does say paying attention. I have no knowledge of sharing cable service or finding excess coaxial cable around frat houses.
Posted by Beau at 8:00 PM 2 comments: Links to this post

Email ThisBlogThis!Share to TwitterShare to FacebookShare to Pinterest
Labels: funny

As Mother's Day is approaching, a lot of the ads that get into my mailbox are becoming mom focused. I quickly scan them and delete them, like most other ads, but the fact that they have Mother's Day themes sticks in my head.

I also get lots of spam. And almost 100% of the Spam is to enlarge my male organ. 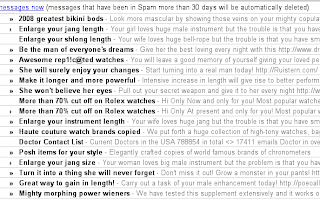 Imagine my surprise when I see this ad from Red Envelope...

Compared to all the spam, that subject line seems pretty racy for Red Envelope and not quite the subject for Mother's Day.

But here is another twist. I followed the ad with the text, "Not everyone desrves flowers." Not quite the right sentiment with Mother's Day approaching, but I'll check it out.

Son 3 was quite surprised and wanted some explanation, "Is that guy POOPING in a box?"

His next statement was, "Click on his butt." I guess the surprise didn't last too long. 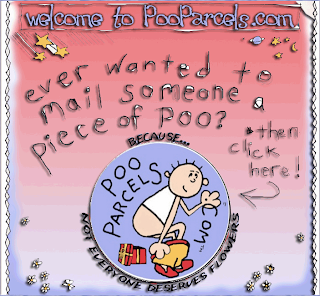 I was intrigued. I had to see what the product looked like. 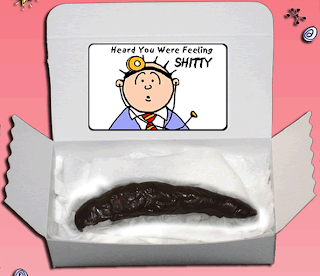 It's chocolate. Or that's what they say at PooParcels.com. That's pretty disgusting. I wonder how they make them? Do they have a row of strange sex toys [safe link to my wife's blog] that extrude the chocolate? That might be too shocking too see!

I don't think that this targeted advertising is working well. Funny gifts, yes. But not for Mother's Day.

Now, I've got to figure out how I want to mail poo too...
Posted by Beau at 3:30 PM No comments: Links to this post