Bring your tablet into the kitchen with a Tablet Chef Stand

I enjoy cooking and I enjoy technology.  Probably the only thing better than combing the two is cooking while hiking.  But I digress a little.

I'm a recipe clipper. I read several newspaper's cooking columns, I subscribe to Sunset magazine, a bunch of cooking newsletters and I follow some awesome cooking blogs. I've got 1,232 notes in my Recipe Notebook in Evernote, my largest notebook.

Almost always, I read the recipe I'm following on my phone.  I have a 3 inch ring binder with recipes printed out, but many times, I just go back to the website on my phone.

My phone usually has coconut oil smears and spices in the case.  I've even learned that drips of water (yes, dangerous) are read as a finger touch on my phone's screen.

I was given a Belkin Tablet Chef Stand + Stylus to use in the kitchen and an tablet to try out with it. It's pretty awesome, it holds the device two ways and the stylus helps keep my messy fingers off the phone. And to make it even better, it all wipes clean, maintaining its shiny finish. 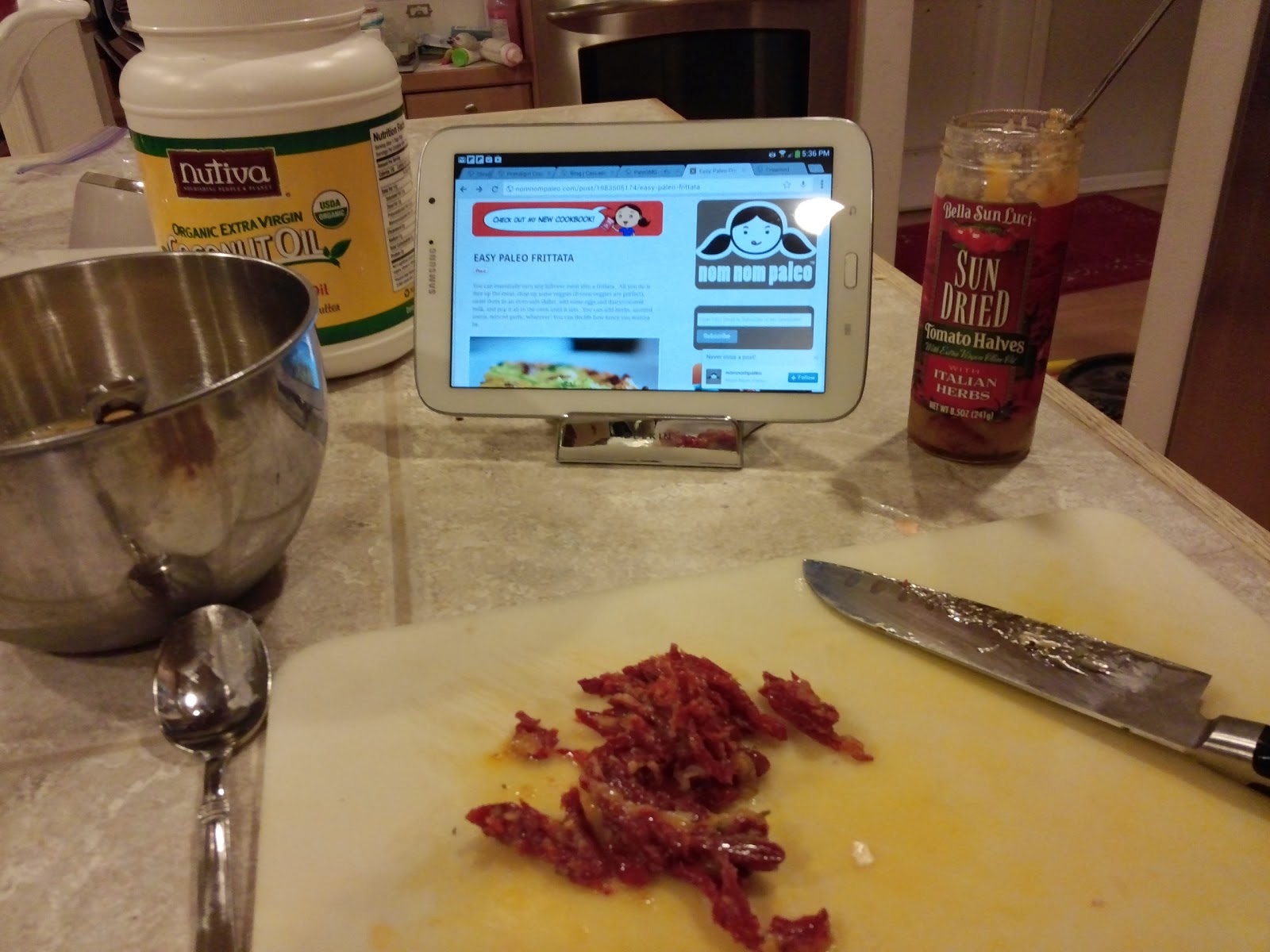 It's great having my recipe from some of my favorite Paleo cooking blogs, like Nom Nom Paleo and PaleoOMG on a big, easily readable device, angled so that I can best see it while cooking.  An internet connected device is a great cooking tool, it ranks up there with my Santuko knife.


Another one of my foodie passions is coffee. I recently purchased an Aeropress and attended a workshop at Caffe Vita for different methods to brew coffee. There is a lot of science to the art of brewing, but brew time is an important factor.  My phone has become my kitchen timer and the stand works great for that!
And with the right recipe, I'll even eat squash!
And if any of Santa's Elves are reading this, that Galaxy Note 8 in the pictures was a loaner. I don't actually have a tablet but AT&T offers $100 off any tablet with two-year service agreement. Hint, hint!

What are your favorite online recipe websites or cooking apps?

Disclaimer: While I've got to return the Galaxy Note Tablet, the stand was mine to keep for reviewing it in this post.  I think its pretty cool and wouldn't have written about it if I didn't really think that was cool.
Posted by Beau at 9:49 AM No comments:

I received some Brussels Sprouts from Farmstr and turned them into Roasted Brussels Sprouts with Capers and Lemony Browned Butter, a recipe I found on the Seattle Times All You Can Eat Blog.  Farmstr, a Seattle startup that connects local farmers and consumers.  It helps support sustainable farming and putting farm fresh food on people's table at reasonable prices.  When they offered my wife a box of Brussels, I was all over that as I love Brussels Sprouts. In fact, it got me into a Brussels Sprouts mood, so this is a two-fer of Brussels Sprouts.

I met Janelle, the Farmstr CEO, in front of my office in South Lake Union.  She drove there in an old half-ton Ford pick up truck, with the box of Brussels Sprouts in the back.  We were having a great chat about the benefits of paleo eating and what Farmstr had to offer and generally how cool the whole process was when the cops decided that they didn't like how she had parked and cut our exchange short.

That's how Farmstr works (minus the cops); farmers setup drop-off points and people reserve their eggs, grass fed beef or whatever is in season.  These sprouts came from Stanwood because the farmer's original, commercial buyer wanted Brussels in their store earlier than anticipated, so they needed a buyer once they were ripe.  And I lucked out.

One of the easiest way to cook Brussels Sprouts is roasting them.  Season, toss with your favorite oil and throw them in the oven.  You don't even have to turn them mid-way through, but it helps. 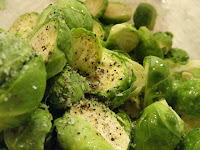 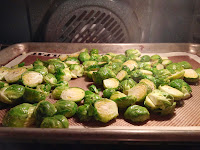 Brussels sprouts this way taste great, but they taste even better with a bit of acid. This recipe did it with both lemons and capers.  While the Brussels sprouts roasted, I browned some butter added capers and lemon juice and BOOM, insta-sauce. 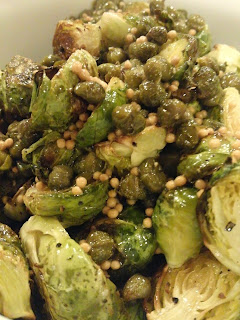 I made meatloaf muffins and some pan fried sweet potatoes to accompany the Brussels Sprouts and had a nice, paleo meal for my family. With locally produced vegetables, from a farmer that I could actually meet and a farm I could actually visit, no less. 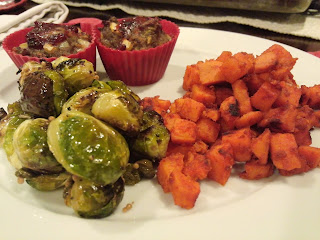 But life got in the way and my daughter's swim meet went rather late.  Then Heather roasted some sprouts with sausage and used the last of the Farmstr sprouts.  I wasn't going to be stopped, though.  I got some sprouts at my grocery store, which cost $0.20 per pound more than the fresh sprouts from Stanwood, Washington.

I found this recipe on Saveur Magazine, Creamed Brussels Sprouts, and decided to give it a go.  The recipe calls for cream (hence the name), which alas is not paleo.  But coconut milk is!  So, I replaced the cream and sugar with a whole can of full fat coconut milk, and it worked great! 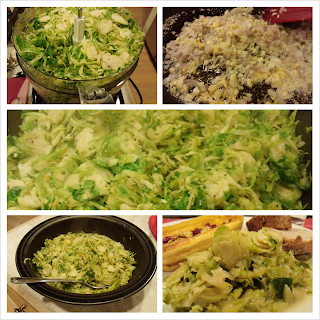 How do you like to eat Brussels Sprouts? Let me know in the comments.  I haven't even mentioned how good they are with bacon or better yet, pancetta.  If I had more sprouts, that would be my next way to prepare them.

Read more about Farmstr on their FAQ and if you're around Seattle, check out what they have to offer and if you like Brussels Sprouts, get some!


I wasn't compensated for this post, other than some Brussels Sprouts and its all my opinion.  I think Community Supported Agriculture is pretty cool and eating, clean, real food is good for you.
Posted by Beau at 9:14 AM No comments:

A few weeks back was my 17th wedding anniversary.  Though our anniversary fell on Saturday, I planned on taking Friday off so I could spend some time with my wife (try it, its way better than working).  The night before, my wife got this text message from her sister.  It served as the inspiration for our anniversary breakfast the next day. 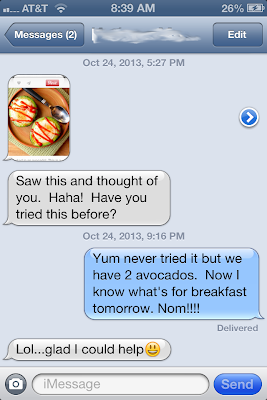 Baking eggs in an avocado is pretty simple. Pre-heat the oven to 375 degrees and put an egg into the hollow of an avocado.  Depending upon the size of your egg and the size of the avocado seed, you might need to scoop some extra avocado out.  I didn't do that and lost quite a bit of egg white in the over flow.  But then you get to eat some avocado early, as a preview of whats to come.

Season with salt and pepper and bake the avocado for 20 to 25 minutes. I think that baked eggs are really good, but they take longer to cook than you think.  When it's done drizzle with your favorite hot sauce, I like the sriracha because its thicker and holds its shape. 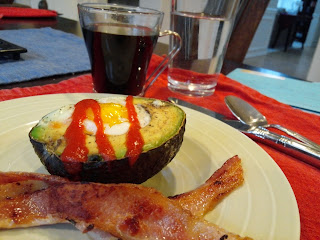 The texture of the avocado didn't really change with baking, as sometimes warm mushy things can be weird to eat. With some bacon and coffee (and the obligatory glass of water), it makes a great breakfast!

You can use an avocado as a little bowl for all kinds of things.  I sometimes will make tuna salad and fill the avocado.  Let me know what kinds of things you like to put in your avocados!