One of the last Lime Pie pops from the previous swim meet went to one of my neighbors on the kids summer swim team. She said that the were good and I asked her if she wanted to collaborate for dinner at the next swim meet.   She was quick to come on board although parents should have fun at swim meets too, even though there was a bit of a double standard of eating gooey yummy stuff while the kids are supposed to be out there giving their athletic best performance.

I went through my sandwich recipes in Evernote and found a few good sandwiches. I traded a few emails with my neighbor and she said she'd bring a dessert. Dessert and sandwiches - that's a dinner in my book!

Even though, my neighbor said in her email she went to Tulane in New Orleans, I went with the muffuletta. It seems like such a simple, yet flavorful combination for a summer's evening. I was wrong on at least one count, but we'll get to that later. 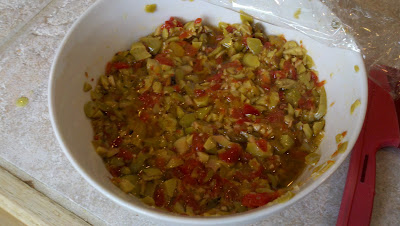 Early in the day, I made the olive salad, so that the flavors could nicely come together.  I'll cop to it - I took more than one spoonful during the day. A good cook always tastes their product!


The sandwiches came together quite nicely and Kid3 and I headed off to the swim meet.  As we left, it started to rain.  I went back in and grabbed my gore-tex parka, which got me a little joshing from my son. It didn't seem to him that that was the right jacket for a swim meet.

It rained off and on as we went to the swim meet, but it was a light summer rain. I found a spot to sit and our neighbor joined us shortly thereafter. She had brought some salads and an apricot tart. This swim meet was going to be alright!

We enjoyed the sandwiches, as our kids did too between events, then it started to really rain.  We didn't have a shelter to hide out under, so my neighbor hid under her umbrella and I stood up so that my parka would keep me dry. While that kept us both dry, my chair filled with water, so I had no dry place to sit afterwards.  This is where I was wrong: the sandwich was good, but it wasn't a summer's evening. It was like early spring in the PNW with all the rain we got.

What was really funny, if you can call it that, was that the weather kept changing. I could see the break in the clouds that was coming our way and sure enough, the rain would stop, the sun would come out.  And then about 20 minutes later, the rain would start up again.

During one of the sun breaks, we broke out the apricot tart and enjoyed dessert.  Then it started to really rain.  My son went and stood in the warm shower in the locker room for something like 30 events (at least an hour, I stopped keeping track of the time). I think that he was the wisest of all of us. I was just as wet as he was (my boxers were wet), but at least he was warm.

The swim meet might have been unpleasant, but the food was good. And since my trip next week was cancelled, I need to start planning for this Thursday's swim meet!

In a recent Tasting Table newsletter, there was a recipe for Lime Pie ice pops. I think I read the email on one of the recent (and rare) nice June summer days here in the PNW.  Since summer swim meets were starting up, I decided that I'd make them for us for the Thursday swim meet.


Wednesday evening, my wife and I were going out to a foodie tweetup. My grand plans entailed me stopping at the grocery on the way home to pickup the limes and sweetened condensed milk that we didn't have at home.  Such are the plans of mice and men: I forgot to stop at any one of the 3 grocery stores I had to drive by.

But I was not going to be stopped.  Doing some backward planning, allowing for at least 7 hours of freezing (a few more than the recipe calls for), I needed to have them in the freezer by 10am.  Adjusting for the fact that I also needed to be working at that time, I needed to get them in the freezer before I started working at 7am.  In turn, that meant I was at the grocery store at 5:30am.


The early morning shopping trip, though, allowed me to make the ice pops with Kid 2. That Thursday was the last day of school for her and she had extra time, since she didn't have to make her lunch.
We got the ice pops in the molds and in the freezer and Kid 2 off to school.  Undisturbed, the ice pops sat in the freezer all day, hardening.  Only Kid 2 and I knew about them and I know for me that the surprise was building all day.  I was looking forward to enjoying them at the pool.  As the day went on and I was thinking about the tart lime pops, I came to the conclusion that I'm going to eat my way through the summer swim meets.  Summer swimming is fun for the kids and its gonna be yummy for me (and my wife too).
I took all the ice packs, loaded up my cooler and a few bags to smash graham crackers.  Then as the kids finished their events or it was time for a refreshing break, I'd prep a lime pie pop for them.  They actually tasted like Key Lime Pie, which was a great snack for the [non-swimmers at the] swim meet.

If you'd like to try them out, you can find the recipe here.
Posted by Beau at 3:03 PM No comments: Links to this post

This week, I've discovered Instapaper.  I know that I'm late to the party and that Instapaper has been around since January, 2008, but its pretty cool. In short, its a read-it-later web application.

This week has been quite busy, both at work and in people on the web publishing interesting articles.  Since work pays the bills, working was the priority over reading things on the web [special note: work pays the bills every week, so that priority isn't special to this week]. I started an email thread to myself with the subject "Read Later."  After it had about 10 messages with a few URLs each, I realized that I had to find a better solution.

A quick Google search led me to a few applications, but Instapaper stood out, because I had just heard that it was one of the applications threatened by iOS 5. I'm not an iPhone user, so that didn't really matter to me (and I don't think it really matters anyway, as you'll see later).  It was a quick sign up and I was ready to go.

Instapaper provides a bookmarklet which basically adds the page you are reading to your Unread Items.  I use Chrome as my web browser and there are a few extensions which put a button that does the same thing.  I went that route, because it just looks a little nicer than the bookmarklet and it also will automagically close the tab of the page I'm marking to read later.

It wasn't until I was away from my computer, waiting for my kids after swim practice that I recognized the true magic of Instapaper. I had some time that I was looking to fill and on my Android phone, I went to the Instapaper website.  There was my list of web articles to read, even with a specially formatted text only link.  I read a few things, archived them (removing them from my unread list) all quickly and easily on my phone.

This was my resultant tweet.  It's that kind of cool. Excuse the funny grammar, it was voice transcribed and I was walking at the time and didn't correct it.

Because we discovered the magic of @instapaper this evening.less than a minute ago via Twitter for Android

Beau Raines
beauraines
One of my friends replied to this tweet with "seriously? Just now?"  Yep, there are technological solutions out there that drive productivity that I've not started to leverage yet.

There is an iPhone application too, but I can't say much about it, as I use an Android powered smart phone.

But this is a big time saver. With two quick clicks, I can mark something as interesting to read later, when I have more time.  With the nice mobile interface, that could be anywhere, like when standing in long line.

With everything we have coming at us these days, services like Instapaper can really help manage that information fire hose.
Posted by Beau at 8:30 AM 1 comment: Links to this post