After reading this post, you will probably think I'm a geek. I don't think I would argue with you too much.

We needed some more gallon ziploc bags and Heather picked up a 3 pack at Costco the other day.

Why are these bags blog worthy?

Because they fit an unfolded 8.5 x 11 piece of paper, thats why!

It's a quick and easy way to provide water-proof protection for papers. Living in the Northwest, it's important to have that ability in order to protect papers the kids are taking to school (yep, I make them walk in the rain - more character building - see my comments) or to protect maps when hiking.

When does this ever happen? Netflix is reducing the price on my rental plan.

Can you believe it?
Posted by Beau at 4:26 PM No comments:

Why use a phone book when you can use an online directory?

As I put them away, I pulled three phone books out of the drawer and threw them in the recycling bin. I don't think phone books see much use in our house.

I know I haven't used a phone book since we moved here almost two years ago. Why do I need to, when I have great online sources like Switchboard.com and Google maps?

One number to rule them all

A few weeks ago, Google bought Grand Central, and being one of the Google believers, I signed up to be an invitation-only beta tester right away.

For those that don't know, Grand Central is a web based service that gives you a phone number that will ring what ever phones you set it to. The idea is that the phone number is associated with the person, not the location (home, work, mobile, etc.). So you can give everybody one number and their call goes through to whatever phone you are sitting by.

This isn't about making yourself infinitely more reachable, it is about giving people control, both the caller and the callee. The caller knows that the call will reach me, whether I am at work, at home or on the road. As the callee, I get great functionality like call screening (caller's get announced, plus I can listen in on the voice mail - like with an old answering machine). All my voice mail comes to one place, which is accessible by phone or by the web and my contact details are easily managed (although there are some contact manager applications that do it better) and integrated with the phone.

As a remote worker, being able to be reached is important to me. It is just as important to me that I can find out who was trying to reach me, when I choose to be unreachable. Having the address book and voice mail web accessible just makes it all of the better.

But something I think is even neater is the talk of the Google Phone. With a service like Grand Central, the phone doesn't need to have lots of memory or features - it can be just a simple phone with a good web browser. It doesn't need an address book, it can use Grand Central and keep the on-phone memory requirements low. With an integral web browser, you could get at your email (Gmail) and your calendar (Google Calendar mobile). You could take the dumbest phone out there and have the same functionality as a smart phone.

I think that it is really neat, because it could take so much of the costs out of the gadget and give so many more people, in the US and the world, digitial, mobile communication and computing.

I think an idea like this goes hand in hand with Google's planned bid on the upcoming FCC bandwidth auction. They have the applications, which are in most cases, pretty well optimized for mobile browsing. They'll have the spectrum, if they spend their 4.5 billion USD. Then all they would need is a device. And users. I'd be the first to raise my hand...

But back to Grand Central. I never need to tell anyone another phone number, even if I change them, because I change cellular providers, jobs, or VOIP phone provider. That kind of convenience is the greatest. So far, after using the service for about a week, I love it. I've given them some feedback about features I would want or things to tweak, but it is a great concept and a great execution.
Posted by Beau at 9:22 PM 1 comment:

I feel a little bad. I think I lied to my neighbor, Diane. She brought me a catalog of Penzey's spices around 7pm yesterday. I had just decided to stop working and think about dinner.

But I did have dessert planned.

Alas the raspberries were bad. Luckily, the Trader Joes Raspberry Jam has lots and lots of raspberries in it and the sauce was still quite good.

Mmmm. It was good too.

Email ThisBlogThis!Share to TwitterShare to FacebookShare to Pinterest
Labels: cooking

He's got something up his sleeve

You know we are in trouble when your 5-year-old comes inside and says, "Would you be freaked out if there were snails in the house?"

My wife quickly says "Yes," but I say, "No, snails just don't belong in the house."

Thankfully the snails stayed outside.

Even the baby ones.
Posted by Beau at 4:12 PM No comments:

They are going to think we beat our kids!

Today, Alec came home from his swim meet, not with a gold medal, but a cast.

Evidently, he fell on his heely's (those skates with wheels in the heels) and potentially broke some small bones in the wrist. They aggressively treat this type of a potential break, because the wrist bones don't have good circulation. The break might not show up on the initial x-rays, but it could in 10 days and if you haven't been treating it, bad things could result. So, he now has a cast of his own.

Two kids, two broken arms... Parker better be on the lookout.
Posted by Beau at 8:24 PM No comments:

Yesterday, Parker and I got to spend a big chunk of the day together while Heather and the other kids went to a swim clinic.

We took a walk and watched the expansion of our neighborhood, but afterwards, we went to the Issaquah Farmer's Market. Every Saturday, from 9 - 2, there is a farmer's market down by the Costco Headquarters. 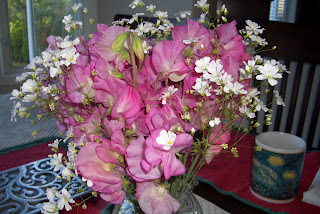 It was a lot of fun. First we walked through, just to see what there was: food (prepared) vendors, crafts and then fresh vegetable stands and then we got lunch. Eating and walking doesn't do so well with a 5 year old, so we sat down at a picnic table and ate. We ended up getting cherries (he didn't like the Rainier cherries so much, so we got sweet red ones) and fresh Rival Apricots (we snacked on those while we walked around). I bought some cilantro and then Parker picked out a bunch of sweet peas for Heather.

I ended up not having enough cash for raspberries, blueberries and strawberries, but the pasta booth took credit cards. I bought Chipotle Linguine and a recipe for a sea scallop and tomato sauce. The noodles were really good and inventive, but the sauce was only so-so, but we ate on our patio al fresco, so it was still an enjoyable meal.

Parker and I also made ice cream with the cherries. We followed the Ben and Jerry's Cherry Garcia recipe from the cook book Heather got me for Christmas. It was really good and quite simple. Heather even said so and she doesn't really like cherries.

Overall, Parker and I had a really nice day together - we got a lot done and we got to spend some really nice time with each other.
Posted by Beau at 5:47 PM 1 comment:

More houses in our neighborhood

I'll start this post off with a disclaimer. I am not one of those NIMBY people and I'm not totally against cutting down trees (I have cut down my fair share already). I don't want this post taken out of context and if I see that it is,

But WTF ESPN announcers? He isn't a national hero. Just because it is the 4th of July, people who do great things (if eating hot dogs counts) automatically become heros.

The real heros are people who are making sacrifices, doing something for their country. It is that Private First Class in a foxhole in Iraq, making sure his buddies are safe inside the wire. Its the firemen, who aren't going to be able to BBQ with their families, because they are out stopping a fire started by some dumbass who blew off his fingers.

Patriotism and National Pride are great things and today is the day to celebrate them.

Email ThisBlogThis!Share to TwitterShare to FacebookShare to Pinterest
Labels: rant

When you are having a rough day...

... it is nice to get:
Thank goodness for all of those things that happened to me today. They help me get through the rough days.
Posted by Beau at 5:38 PM 2 comments:

Um, so there were these ads that caught my attention. Usually I am pretty immune to them, but hey, I was drawn in by happy faces on tushies.

You've got to check out this site!

Basically, the Washlet is a mod for your toilet - that comes with a remote control.

They have several sections, Washlet 101, Why it is Better and Happiness.

I won't spoil it, so you have to go check it out, but a few sound bites from the site:

"Don't we all deserve a little pampering?"
"The Washlet will even neutralize the air around the bowl."
"Hands liberated from their usual chores. Nice."
"...Washlets patented wonder wave."
"You can select from several modes... that will put you into happiness mode."

Don't think about it any more - just go look.

Note to readers: I don't own one of these and I'm not getting any kickbacks from Toto, the ads sucked me in.
Note to Toto: If I make a difference in your traffic, a freebie would be nice!
Posted by Beau at 11:46 AM No comments: