This weekend is going great! Saturday morning had a very nice start to it and the weather was great. So, while Chase was at swim practice, Heather, Alec, Parker and I went for a walk in downtown Issaquah.

We walked down a trail from the pool and community center down to Front Street. Along the way, we saw some modern art and a whole lot of pregnant ladies, which are art themselves. 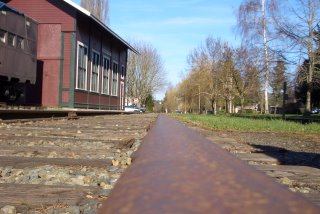 There is an inactive rail line in Issaquah and it looks like they've made a small train museum out of it and Alec and Parker enjoyed playing on the train tracks. Hopefully, they know the difference between real tracks and old tracks. 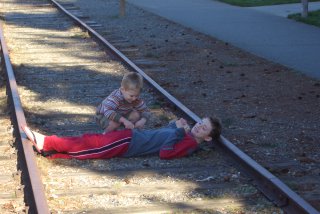 As we walked back to the pool, to pick up Chase, we stopped at the Fisher Brothers Butcher and bought some beef jerky and German hunter's sausage. Again, that place is so cool.

We headed to lunch at Su Casa, which has been recommended to us as the best Mexican restaurant in Issaquah. It was pretty good. It is a family run place - we were seated by the daughter, who really knew her stuff. They were out of the kids menu, but she was able to tell us what was on it and make recommendations for our kids. As to the grown ups, the food was very good and the plates very large. I'd have to agree the restaurant was very good.

We headed home and were trying to figure out 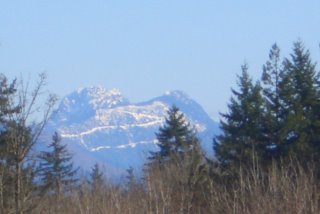 The road is pretty distinctive and I'd found it on some topo maps I had bought, so we headed out for a Saturday drive. It was great, we took some small backroads (202, Tolt Hill Road, 203) which took us to Highway 2. We headed down Highway 2 towards Skykomish and then to some National Forest Roads. Very quickly we got into thick trees and one lane dirt roads. It was great to get off the pavement onto dirt. Since it is still wintertime, the road soon became a trail (really ruts in the snow). As we got to the intersection where the road started heading up the hillside to where we can see it from our house, it hadn't been traveled enough to have ruts, I decided that we should turn around. The map did show that it probably wasn't passable too far, because it was shown as a seasonal road (and the winter season was "winter activities/snowmachines").

At the turnaround point, there were several cars parked. We had arrived as one guy was putting his cross country skis on top of his car to head home and another guy (in running shorts) came running down the trail we had wanted to drive up. Definite hard core winter people.

It was ironic, because the kids had come straight from swim practice, still wearing flip-flops. Parker was wearing shorts. But I wasn't going to do anything stupid and get us stuck - I've been stuck enough in Alaska.

We turned around and instead of heading home, we went to Steven's Pass, hoping to see sunset. The mountains are high enough around the road that there wasn't much sunset to see, so we stopped at the ski area for dinner. Again, funny looks from the skiers in their snow gear and my kids in shorts and flip-flops.

After dinner we headed back, through the small towns and back roads of Washington. All in all, it was a great drive - about 4 hours and 159 miles. I'm so happy Heather got the "let's go there" bug. I really like being so close to the outdoors here in Washington, it is a great place.
Posted by Beau at 10:51 AM

Email ThisBlogThis!Share to TwitterShare to FacebookShare to Pinterest
Labels: restaurants