I now know why they don't stop

Since moving here to Washington, both my wife and I have noticed that people don't pull over for emergency vehicles. I've confirmed my observations with other California transplants as well.

The first time I almost got run over when I slowed down for an ambulance, I assumed that maybe the law was different in Washington. In California, U-turns are allowed, except where they are expressly prohibited. On the other hand, in Washington, U-turns are illegal except where the sign says you can make them. But not pulling over for emergency vehicles, come on. That had to be the same.

This morning, on my drive to work, I now understand why. 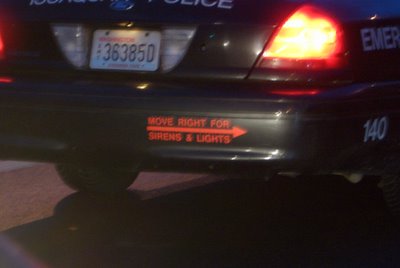 This was on the back end of a police cruiser (yes, I just busted out my camera at the interstection and took a picture of the cop car - Copwatch, call me if you need me). The only time you see it is once the cruiser has passed you, which won't happen if you don't pull over. If they want to make a reminder like that, it has to go on the front of the car and printed in reverse. Now it is perfectly clear - they want you to pull over, but haven't been able to get in front of everybody to tell them that.

Funny thing, I saw another sticker just like this on a Jeep Cherokee with fire department stickers on it at the grocery store this evening.
Posted by Beau at 6:18 PM