This weekend, my family and I took our first trip - back to the Bay Area! Our trip went pretty well, with a few mishaps.
The Seattle airport's parking garage is posted that vehicles over 6-1/2 feet won't fit and my wife's Expedition is pretty close to that. So, just to be on the safe side, we chose to park in the Overhieght Parking area. For some reason, we had to drive all the way around the terminal and parking garage to get there. And when we started our tour, we were right by the parking area, but all of the signs pointed us away from it. Evidently we had to drive all the way around to make sure the area was secure!
We finally got to the airport and still had plenty of time to spare and on the way into the terminal, we saw several unattached SmarteCarts. I recalled that they offered a reward to return them and when I mentioned that to my small capitalist kids. they collected all they could find. It was crazy - between the three kids (each with a small rolling case) they must have had 8 carts. Parker couldn't even see over the back of the cart, but he insisted upon pushing too! 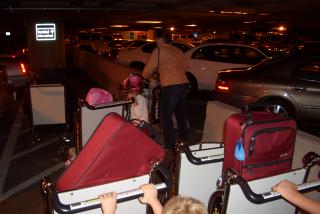 Remember that we paked in the Overheight Parking area? It is a parking area not a parking garage. Sea-Tac is built around a large parking garage and the airport terminal is on the fourth floor. So, all the carts went in elevators to get up to the terminal, where we were sure to find a return station.
Well, evidently they don't give that reward any more. Alec demanded that I pay him the money instead of getting the reward. I didn't.
We hadn't eaten dinner yet, and our plan was to eat in the food court in the airport. Here a certain comedy of errors (if you discount all the previous comedy) began. I waited in line at Pallino Pasteria with the kids and Heather went to Maki of Japan for some teriyaki. Evidently, we both got to the front of the line at the same time and tried to pay for our dinner's with the same credit card. Obviously, using the same card in two different places must be fraud, so my card was declined. The clerk almost told me to just sign the declined credit receipt. I could have gotten my food for free (which we did, but that is still coming). We ran the card again and this time it worked.
All this time spent running the credit card allowed the kids pizza to cook completely, so we didn't have to wait long. Heather came to us and Alec was carrying the pizza. He rested it on a divider cord and opened the pizza to show his Mom. She told him to close it and sure enough, I hope that Alec learned the lesson of why you don't open the pizza box when it isn't on a table - it all slid out on to the floor.
The pizza manager saw this happening and by the time Alec had picked it all up, he had brought out a new pizza.
So, the kids and Heather all have dinner. Maki of Japan sounded tempting - I like sushi. But the chance of food poisoning while trapped on a plane sounded risky. Live on the edge!
So, I waited in that line and got out my credit card (the same one as before) and it was declined. "Did you make a purchase here today, already," the cashier inquired. Well, evidently, buying sushi twice in one day is also credit fraud. So, my Check Card came in handy, becuase it never gets used. Good thing, this way my inactivity clock starts over. I'm probably good for another year of not using it. The sushi was as good as any pre-packaged sushi you can get at a grocey store and there were no stomach pains on the trip there.
On Southwest Airlines, you get pre-boarding priviledges with kids under 4. So we took advantage of that and were first on the plane. With a family of five, though, we had to sit in two rows. Not really a big deal, I sat with Parker and Heather sat with Alec and Chase. On a previous flight, Parker had big problems equalizing the pressure in his ears, so we had to make sure that everybody had gum to chew so that their "ears didn't get sick." It was really cute to watch the kids read the safety cards, which were pretty easy for them to read being in International-Picture-ese.
Parker decided that he wanted to sing on the airplane, so he sang for most of the way there. Most of the passengers thought it was cute, because he really isn't that loud - compared to an airplane.
While on the flight there, I came to the realization that I needed some kind of book to put the wedding ceremony in. I figured it out, I should get a Moleskin Journal at some place like Borders. Heather had the rental car, so I found the closest one and decided the boys and I would walk the 1.3 miles. Without being able to print out the map, I got a little misoriented and we walked about half a mile - the wrong way. We walked back, and by then, it was time for lunch. We ate at Arby's, something I haven't done in a long time and then set out again, this time in the right direction. Two hours after we started, we ended up at Borders. We found the journal, read some kids books, and called the bride for emergency evacuation back to our hotel.
The wedding went off without a hitch. It was the first wedding I officiated at, so now I am a professional.
The wedding reception was nice and there was lots of dancing with both my kids and my wife. It was a lot of fun.
We flew home with out event, humorous or otherwise. Unless you count all the people who looked at the two empty seat next to Chase and Alec and then passed it up. Finally, some lady chose to sit there. Chase chatted it up with her for awhile.
Chase had trouble finding our rental car (a crappy Ford Taurus) everytime we went out to it. Tonight, we rented a car so that Heather could get the Expedition repaired. We ended up with a bright red Dodge Neon. We hadn't picked up dinner yet, so we went to a Teriyaki take out place. As we walked out to go to the car, Chase went to the first red car she saw and pulled open the door. Well, it was a mini-van - not our rental! She closed the door and we walked away, embarrassed. Luckily, we live in a safe enough area where the people that don't lock their doors also don't have alarms.
Kids do the darndest things. It makes you smile.
Posted by Beau at 9:04 PM