Today, my wife and daughter did a girls-day and went shopping for dresses for the upcoming wedding. So, the boys and I, we had a boys day. First, we went to Blockbuster and returned some of the movies we had rented.
While we were there, we asked the girl behind the counter where to go for a milk shake. 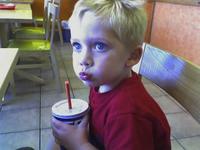 She suggested a burger joint in the same shopping mall, so we went over there and ordered three shakes. Being in the ice cream industry, of course, I asked who made their ice cream. The guy behind the counter said, “It’s just soft serve,” pointing at the machine in the corner. Milkshakes are supposed to be made with real ice cream! It wasn’t like the milkshakes were bad, they just weren’t a great milk shake. Soft serve isn’t real ice cream, unless you are buying the stuff that my company makes. How is that for a shameless plug. The kids still had a good time. Boy thing number 1 – eating.
When we came back to my car, we found that my car had made a friend. 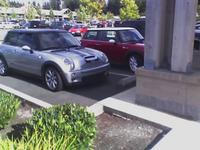 We hopped in and did something else that boys do – we drove. We had to drop of a digital cable box in Redmond, so we took the back way – a winding road and had a blast driving. On our way there, a red MINI Cooper with the Union Jack roof graphics fell in behind us. It was an older couple and when they drove past, we waved at them and he honked and she waved at us. Owning a MINI gets you into a friendly club.
We got home and decided we would go for a walk and explore (boy thing number 3) some of the trails in the area. We walked for a long time and found two playgrounds, heard things in the woods, found something that appears to be bear scat. Our new neighborhood is cool and there are all kinds of trails to walk on. We were not far from people’s back yards, but it felt like we were deep in the woods.
After we got home again, boy thing number 4 – we played video games. After a while, we decided that my wife wasn’t going to be home any time soon, so we started setting up the stereo (boy thing number 5) and then ordered pizza (boy thing number 6). We drove to Fall City to Sahara Pizza to pick it up and then drove home. I’ll go there again, for both the pizza and the drive.
My wife finally did come home, but no dress for the wedding. I guess that means there’ll be more boys days in the future.
Posted by Beau at 10:16 PM

Email ThisBlogThis!Share to TwitterShare to FacebookShare to Pinterest
Labels: MINI