Every afternoon, Kid 3 comes to into my office with his list of 3rd grade spelling words.  I read the word, maybe use it in a sentence and he spells them. Just to be sure he doesn't memorize the list in order, I always mix up the order (its not random, but in case he's reading this, I won't give away my pattern). He almost always gets them right, which I attribute to the fact that he studies them before he comes to me (let me live my dream). He's really good at spelling.

But here is the thing: he doesn't actually learn the spelling list. He just knows how to spell words. Sometimes, I throw other words in there, maybe not necessarily third grade words or a word from a previous list and he spells them. Sometimes, he gives me a funny look, but he just spells them. To really change it up, I sometimes make a crazy sentence out of several of the words.  And he spells them.

Every Friday, I ask him how he does on his spelling test.  Last week, he was not at home, but I found his spelling test and he missed one of the bonus words. I was a little surprised, because even though the words are hard (and I don't know what some of them mean), he had done a good job in practice. 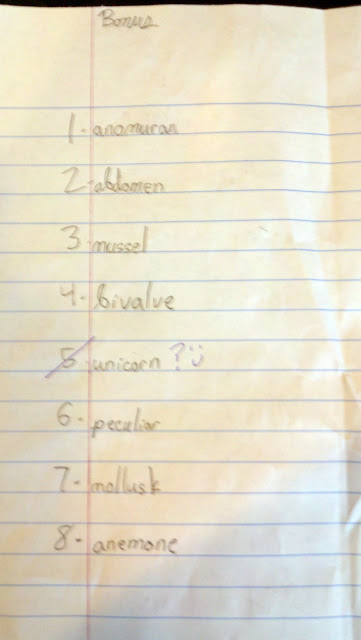 Evidently, he mis-heard his teacher saying univalve and he wrote unicorn. I can hear the resemblence, but man, if only he knew that unicorn wasn't one of his spelling words, he might have asked for her to repeat it.

Yet another example of kids doing the darndest things!

Email ThisBlogThis!Share to TwitterShare to FacebookShare to Pinterest
Labels: parenting

I think it's a case of, "You say univalve, I say unicorn."