Cupcakes and coding - a nice day off

Earlier this week, I took a day off. I was at my PTO cap and needed to take the day. Nothing really was planned for the day, so I did some things that I think are fun. I made cupcakes and reviewed MySQL stored procedures for a side project of mine. Sounds like nice things for a day off, no? 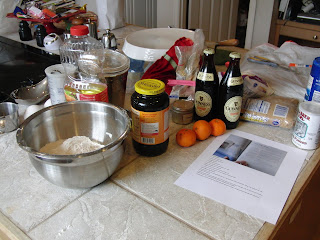 I didn't just make any cupcakes, I made Stout Cupcakes. Yes, there is a bottle of Guinness in these cupcakes. Okay, so I followed a Martha Stewart recipe, but they weren't any frilly frosted cupcakes on doilies. The cupcakes had a heaviness to them, more like a bread, with a bit of spice.  The molasses and nutmeg gave them a "ginger bready" taste. 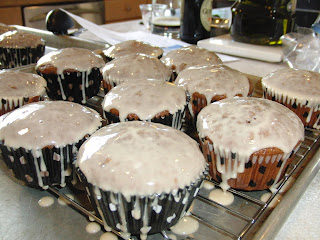 That's stout glaze. No milk or lemon juice in there, stout was the liquid used to make this glaze.

My wife enjoys my cooking, but doesn't want to keep the cupcakes in the house. No sooner than they were glazed, I had called some of the neighbors and asked if they were home.  This is becoming code for "Beau is bringing something yummy."

I thought that they were pretty good. Heather suggested that I make a fluffier chocolate frosting, just to lighten them a bit. I'd be up for trying that again.

So what do you think of Stout cupcakes?
Posted by Beau at 6:40 PM