My own brand of awesome

My friend Whit is going to get to do something pretty awesome: interview the cast of the Avengers. But even more awesome, he's going to get to interview Scarlett Johansson, who plays the Black Widow in the movie. But she's Scarlett Johansson in real life. And he'll get to ask her questions and talk to her. I bet if it were me, I'd say something to the effect of "Buh, uhm, yeah, well."
So, I'm making my own brand of awesome.

A few weeks ago my wife said that we shouldn't eat bacon and deli meat because of the nitrites (or nitrates, I don't know which - don't talk bad about bacon).  Respecting my wife, I took that to heart and considered it. And decided to make my own.

Two weekends ago, I brined nice big turkey breast and then mesquite smoked it.  I sliced it as thin as I could, to make my own deli meat. Its a little thicker than I'd like it to me, but it has a nice smoked flavor and isn't dried out.  It ended up even costing less than deli counter meat, working out to about $6 per pound after I cut it off the bones. 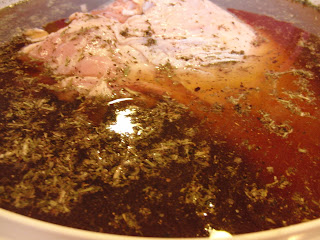 This weekend, I'm taking it one step further. I left work early on Friday so that I could make it to my local butcher, Fischer's Meats and buy an uncured pork belly.  Yes, I'm going to cure and smoke my own bacon. Try that on for size, Scarlett and Whit! 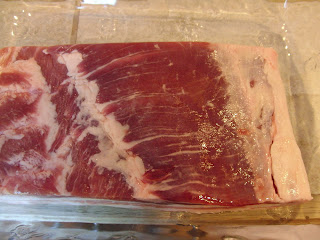 It will take several days, almost a week, for the pork belly to cure.  I'm salt curing it with a little brown sugar and rubbed sage (and no nitrates). Next weekend, I'll smoke it, slowly with hickory.


I'll keep you posted on how it develops.

Whit, you should ask Scarlett if she likes bacon.

And I must send out thanks to my neighbor JH, who gave me a jump start when my battery was dead Friday when I left work early to get to the butcher before it closed.  He drove to the park and ride where my car was, jump started my battery and I made it to the butcher with less than 10 minutes to spare.
Posted by Beau at 9:20 AM

I'll probably be too busy keeping her hands off me. That sort of thing just isn't appropriate.

Also, that used to be my local butcher! Great place.

He drove to the park and ride where my car was, jump started my battery and I made it to the butcher with less than 10 minutes to spare.