Espresso, every day, all day

I've been drinking lots of espresso lately. I've done it in the past, but one of the differences is that now, I'm drinking over the course of the day. It's now 7pm and I just heard the espresso machine go through it's cleaning cycle - its been 2 hours since my last shot, father. 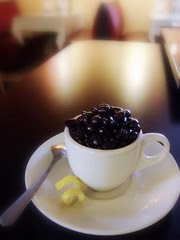 Lifehacker had a post on the benefits of small, frequent infusions of caffeine rather than a large blast and the link to the full, article on Wired is Caffeinate With Care: Small Shots Do a Brain Better Than Big Blasts

But I guess, I'm doing the right thing! The article refers to "frequent, small doeses" to "maximize alertness and minimize jitters." I have no issues sleeping or shakiness at all. Some of the people in the study even reported " periodic small shots made them feel clearheaded and calm." Zen through espresso any one?

I read an article about a UW researcher who has found new evidence that caffeine applied to skin might help prevent skin cancer! I found an article on Web MD dated 2002 saying the same thing, but hey, I wouldn't mind some young, cute barista rubbing espresso over my body to help protect me. Maybe Starbucks should offer that as a service to get people into their stores!

Thanks to CameoSteph on flickr for the picture.
Posted by Beau at 7:16 PM

Email ThisBlogThis!Share to TwitterShare to FacebookShare to Pinterest
Labels: coffee

I'm also pretty Euro in my caffeine habits, although I often opt for tea. If I'm working at home, though, I'll sometimes make myself a shot of espresso. I agree with you on the frequent small doses thing. Periodically I would get a cup of Peet's drip coffee in the morning when we were still living in CA, and I would often feel strange for a couple hours then completely lethargic for the rest of the day. The coffee tasted damn good, though.

Peet's is good coffee! I think that there is one in Redmond, though I don't go there too often...