Yesterday, I met my wife and youngest at Pine Lake Park for a picnic lunch. She picked him up from pre-school and I made lunch. Not a great lunch, but I made special sandwiches.

Let's travel back a few more days, back to Saturday, the day of soccer games. Soccer games come with snacks. Snack on this day was a Smucker's Uncrustable, a strange, obviously crust-less, peanut butter and jelly sandwich sort of shaped like a ravioli. They were interesting in that neither the peanut butter nor the jelly squeezed out of them when you bit into them. My wife thought that they were strange, why not just make your own peanut butter sandwich. But after she had some of it, she said that they were special in that they had peanut butter on both sides of the bread-like substance.

Return to lunch yesterday with me. 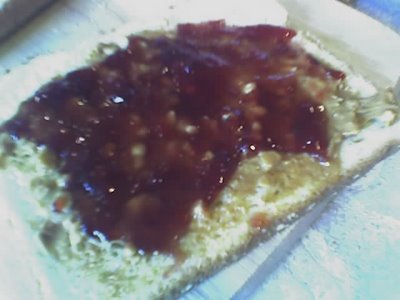 Yes, there is peanut butter underneath the jelly. I did this on both sides of the bread, doesn't it look tasty? I don't think that the picture does it justice.

My apologies if this picture appear six times on my blog later this evening. I took the photo with my phone and tried to send it moblog style, but it didn't work. With just my luck all copies will eventually catch up, even the one I sent to my Remember The Milk to d0 list!
Posted by Beau at 6:31 PM

Email ThisBlogThis!Share to TwitterShare to FacebookShare to Pinterest
Labels: cooking

I thought egg and spam sandwiches were 'special' now you have destroyed my entire belief process.