Thursday in Oakland
It was the fifth spare the air day of the year (so far, 3 and 4 occurred while I was in the Bay Area) so public transit was free. While it was cool, since public transit was my way of getting around on this trip, so much for buying BART ticket for the week. I took the time to figure out what 4 round trips would cost me and buy that ticket in advance. I only paid for BART twice the whole time! 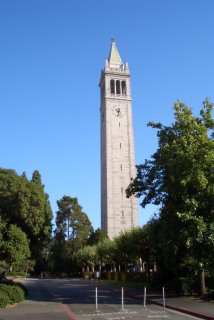 So, I took the 51 down College to Cal just to check out the old stomping grounds. I walked around and it was great to see the old things. Unfortunately, the light wasn't really good for photography, so I didn't take may pictures. I did take the obligatory Campanile photo.

I stopped at Top Dog for dinner and King Pin for a jelly filled donut. Talk about reliving the old days. The lady at King Pin didn't know what kind of jelly it was, she just pointed to the red goo filling contraption. I bought one anyway and was hassled by the homeless panhandler as I left the food court. However, unlike panhandlers of yore, when I said I didn't have anything to give, he mumbled something under his breath at me.

After that, I headed back across campus and caught the BART at Berkeley station and went back to the hotel.

Going home - Friday
Friday was yet another spare the air day. I checked out of my hotel and headed to work. I squeezed a lot into that day and left the office about 15 minutes later than I wanted too. But I wasn't concerned, because I had 1:30 to get to the airport and still be early. Well, fate was not on my side and there were BART problems (trains out of service and switching problems). Trains were quite delayed.

A train came into Rockridge, but it was going to hold there for 10 - 15 minutes. After about 12 minutes, I started to get worried about making my plane (no repeat of the last trip) and started to try to find alternate means of transit, at least to the next station where I'd transfer to a line free of delays. Just when Myla offered me a ride, the train operator said that they'd get started. I was happy because that got me to MacArthur, were I'd change to another line that shouldn't have been affected by the delays.

Well, I did get to MacArthur and on my train, but it was delayed too. By the time I got to the Coliseum station, I had 45 minutes to get to the airport for my flight. That didn't seem to bad, because the airport is only 5 minutes away. Well, lots of people had the idea to take public transit too and I had to wait until the second bus came.

I got to the airport with 28 minutes to spare. My bags were late checked, but I didn't care, I was going home. I got on my plane and flew home and luckily, my bags were there waiting for me!

The weekend
At home (or at swim meets) in the heat of the Northwest. The kids both did very well and qualified for the A Champs swim meet. We swam at the King County Aquatic Center, which hosted the Goodwill Games in 1990 (I think). They beat many of their old times and had a blast.

Monday
I'm in Las Vegas for a meeting with our Sales Team that handles a large club chain. I provide them Supply Chain support and am going to give a presentation at this meeting. And now, I'm going to watch a movie (The Girl Next Door), it was up in my Netflix queue and Heather isn't interested in watching it.