One of the foundations of CrossFit are named Work Outs of the Day (WOD). Some are purely benchmarks and some, Hero WODs, pay homage to those that have given their life in service to their country and community.  Cascade CrossFit does our benchmark WODs on Mondays.

This week, the Hero WOD JT was in our training.  This WOD honors Navy Petty Officer 1st Class Jeff Taylor, a Navy SEAL killed in Afghanistan in 2005, along with 16 other soldiers and sailors when their helicopter was shot down.  From NavySeals.com:

Taylor was part of a dedicated Naval Special Warfare team fighting the Taliban, a fundamentalist regime that a U.S.-led coalition knocked from power in Afghanistan in 2001, but has continued to conduct guerilla operations, particularly along the Pakistan border. Taylor worked to help ensure al Qaeda terrorists could not train in, nor launch strikes from Afghanistan since their lethal attack on the World Trade Center in New York on September 11, 2001.Jeffrey Taylor enlisted in the Navy in 1994 and became a Hospital Corpsman. After graduating from BUD/S, Taylor was assigned to SEAL Team EIGHT, the USS Theodore Roosevelt (CVN 71), John F. Kennedy Special Warfare Center, and SEAL Team TEN. He deployed to Afghanistan in April 2005.

Jeffrey Taylor was one of 16 troops killed when a MH- 47 Chinook helicopter was shot down in Afghanistan on June 28, on a daring daylight mission to reinforce a four-man SEAL reconnaissance squad that had been ambushed in 8,000- foot mountainous terrain.

Taylor, seven other SEALs, and eight Army “Nightstalker” Commandos died in their heroic attempt to rescue their fellow SEALs. LT Michael Murphy, Matthew Axelson, and Danny Dietz fought on courageously, providing protective fire for a fourth squad member to escape, before they were killed in the fierce firefight by overwhelming Taliban forces.

This WOD consists of
21 Handstand push-ups, Ring dips and Push-ups

Its pretty tough. Hero WODs are that way, paying homage to how tough hero are.  It was also my first benchmark WOD when I started CrossFit 10 months ago.

That first day, I remember thinking that this WOD was going to kill me and I just had to finish it.  I had to modify every exercise, pike push-ups instead of hand stand push ups, thick rubber bands on the ring dips, push ups on my knees.  It took me 23 minutes to get through it.

Sunday night, I saw it posted on the blog that our WOD the next day was JT.  I knew it was still going to kick my butt, but it was going to be exciting to see how my time has changed.  I've come along way since I started, but these are pretty tough exercises.  I can get up into a handstand and hold myself up, but no push up, about 1 in 4 attempts.  I still use a band for the ring dips, but its the smallest one we've got.

But it took me just under 17 minutes this time around. 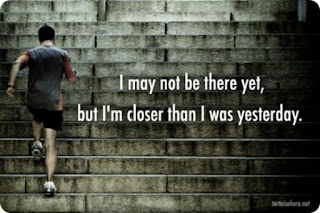 Ten months of dedication to a CrossFit lifestyle is paying off.  Every (weekday) morning, I get up and head to Cascase CrossFit for the 6AM workout. I push myself everyday and I'm always moving forward.  I competed in the CrossFit Open, comparing my performance to other CrossFitters world-wide. There were olympic lifts I couldn't do, but there were also times when I put more weight over my head than ever before.  You won't see me in the CrossFit Games with these elite athletes, but you will see me pushing myself to be my best.  I'm competing with myself.

What do you do to challenge your self?  Do something today that makes you better than yesterday.
Posted by Beau at 8:27 AM

Email ThisBlogThis!Share to TwitterShare to FacebookShare to Pinterest
Labels: crossfit