This week I attended a cooking class at Hipcooks Seattle, courtesy of Goodness Knows snack squares, with a few bloggers and social media people from around Seattle.  As my blog has humble traffic and my Facebook feed is mostly filled with updates on my CrossFit workouts, I was pretty honored to be in that bunch.  Plus, I was the only guy in the class, so lunch with a bunch of ladies always works out.

I have to be honest, it started out with two faux pas on my part.  First, I messed up the calendar and put the wrong location down.  Instead of going someplace about 5 blocks from my work - walkable - we took a 15 minute drive, paid $4 to park and then drove back.  Luckily, we were ahead of schedule and were only a few minutes late to lunch.  Obviously, I was still flustered about the wrong location and when I was introduced to our host, Jenni Hogan, the first thing that came out of my mouth was "Hello. You're tall."  We've got a big flat panel TV and I've seen her do the traffic many times, but even on our big TV, she didn't seem model tall.  Evidently, she used to be a rower and she was wearing tall heels. And she's also probably the first big media personality that I've met.  I wonder if I would have been able to fit both feet in my mouth if I had been as lucky as Whit to interview Scarlett Johannsen (in my research for this post, I learned she canceled but Whit interviewed Samuel Jackson instead!). 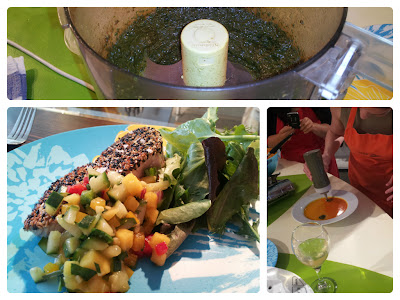 We participated in Hipcooks Healthy, Fresh and Zingy class, making two red pepper soups and a seared tuna with fresh mango cucumber salsa.  I was a little concerned heading to a cooking class given my paleo-ish eating.  But with a name like Healthy, Fresh and Zingy I had little to worry about, although there is photographic evidence of me holding bread, gently rubbing it with heads of garlic.
The Hipcooks class was fun and about just cooking with your senses. No measuring, kind of a tough one for me, just doing it all by feel.  I do like a recipe as a starting point, but after I become familiar with it, I do it by feel.


I learned a few awesome things too.  When roast peppers, I usually cut them into slices before hand.  I lose the liquor, the juices from inside the pepper, so I'll be roasting peppers whole and then cutting them into slices/strips.  Our salsa had lime zest in it and we discussed using leftover zest to make citrus sugars which would make a nice hostess give or rimmer for a cocktail. I'd be interested in trying to make lemon pepper, as we've been eating a lot of chicken lately. I even learned how to pour two soups in a bowl and keep them separated and make a ying-yang look (sorry, no photos).

I wasn't the only one who was learning things - two of the ladies don't cook and they've got photographic evidence of them making some pretty good food now. And now, their friends want Kat to make it for them.

We chatted and snacked on Goodness Knows squares. They're pretty good, not paleo, but small enough that the amount of non-paleo things is pretty negligible.  A cheat with some grains and sugars, but all in all still a good snack.  Since there are four bites in a package, I could even cheat-snack and not feel too bad about it.  Its not like its a whole slice of bread.  I really like the Very Cranberry one (the only one I've tried so far), but my kids and wife like them a lot.  Goodness Knows snack bars will have a place in my messenger bag as emergency snack food. They're currently only available in Portland, Seattle and Denver, but if you pester them on twitter, I bet you could find out when they're coming to you!

After our snack, we went back to class and made a super easy strawberry sorbet. I've made sorbet before, but it involved sugar syrups and mashed berries and my ice cream maker.  This was just frozen strawberries, some vanilla bean paste and a blender!  Throw them all together, blend till smooth and enjoy! I think that this could even be made as a one person snack, say for when a kid comes home from school on a hot summer day (if we ever get those in the Pacific NorthWest).

It was a great break from work to cook and meet and network with some cool people.  I got to meet Kerri's new baby, who was quite possibly the quietest baby I've ever met.  Hopefully, with help from Kristin and my nagging, Heather will move her blog to Wordpress.
Posted by Beau at 10:42 AM

Thanks so much for coming!! I had such a blast with you all and your cooking skills are VERY impressive. So much fun.
- Taller than I look on TV Jenni

Thanks to this blog I now know the name of the dish we cooked! I'm so clueless in the kitchen that even these details are above me. I had such a great time and I'm very inspired to cook this dish again. I will definitely let you guys know how it went.

Kat - I'm sure you'll knock it out of the ball park.