My kids just finished up their two spring breaks.  Why two? One week, the kids had no school and this week that just finished, they had had no swim practice.  During the first week, their mornings were free and in the second, afternoons were free.  I tried an experiment to put them to work during the break.  You'll just have to read the rest to see how it all turned out.

As I've completed my MBA, I've been trying to catch up on the things I've pushed to the side.  Like filing the paid bills and other important papers.  I have a box underneath my desk that I've just been dropping the things to be filed into.  In a functional sense, its an inbox.  But not in a classical sense.  Its much too big, an overflowing moving box for books. 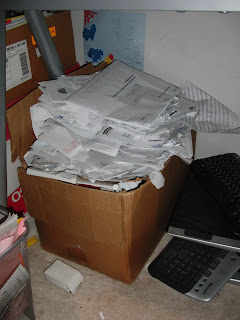 One afternoon, I asked Kid 3 if he could sort the pile which had overflowed to the front of the box (to differentiate what had overflowed to the side of the box).  He gladly took it on and did a bang up job.  He was able to learn the difference between American Express Corporate and American Express Costco.   He noticed the size difference between our mortgage bill and the credit card bill from the same bank.  He sorted them, culled out the envelopes and miscellaneous inserts and filed them in manila folders.

I realized that I had stumbled upon something great!  He was out of school for the next 5 days and his time opportunity costs were much lower than mine (see I learned something from my MBA), so I asked him how much money he'd require to sort the rest of the box.  Learning Number 1 - dollars aren't the correct currency for 8 year olds, Nintendo games are.  So, I offered him one Nintendo Wii game of his choice.  He accepted the offer and said that he'd start on it the next day.

The next day, I had some shopping to do and went to Target.  While I was there, I passed through the toy section and saw the Nerf N-Strike Bandolier Kit set which I thought was really cool would go well to support the Nerf wars which run through our house.

When I mentioned the cool Nerf stuff I saw to Kid 3, he got all excited about it and wanted Nerf stuff instead.  So, I changed our deal to $50 of Nerf stuff.  And asked him when he was going to start.

He said he'd start the next day.  Warning alarms went off in my head, this wasn't going to get anywhere.

We were talking about it at dinner that night and he decided that he wasn't going to do it. It was too much work, but Kids 1 and 2 liked the idea.

Well, spring break is done.  The box is still full (in fact I took the picture when I wrote the post, so its much improved over what it looked like at the beginning).  They couldn't go back to school saying "We sorted and filed papers for our spring break. And got paid."

I've sorted some of them, building upon what Kid 3 did.  I owe him 5 bucks for the work that he did, too.  I've even filed the newly received bills in the files that Kid 3 started.  But the box is still there, full to the gills.  I'll work on it and get it knocked out, kid labor or no kid labor.  But, boy would I rather pay my kids a few bucks to get this box out of my home office.
Posted by Beau at 7:00 AM

Email ThisBlogThis!Share to TwitterShare to FacebookShare to Pinterest
Labels: parenting

Well you know what The Fly Lady would say about that. Fling boogie situation, for sure. ;P

We'll train our little monkeys yet...

I cannot believe you offered him $50!! And he still turned it down. Talk about entitled, spoiled kids. i would have jumped at a chance like that as a kid. Sigh...