This isn't a post about work, I actually blog very little about work, but as disclosure, I do work for Dreyer's Grand Ice Cream. I enjoy cooking (and eating) very much and find it relaxing. And tasty. So, this summer, in a bit of my free time, I've made a few batches of ice cream.

I've seen all kinds of crazy things online that people will do with bacon and decided that I would make some bacon ice cream. I figured that chocolate covered bacon would be a nice combination of salty and sweet and maybe I could even slip it past unsuspecting family members.

So my daughter and I fried up some bacon, melted some chocolate and made some ice cream a few weeks ago. It actually turned out quite well and not as weird as it sounds!

And for those that don't believe it, Heather said, "Mmmm. I like it. I like the bacony taste at the end" and Chase said, "It's sweet and smokey at the same time. "

My daughter and I took photos while we made the bacon ice cream, you can see the full set on Flickr.

Again, in full disclosure, I was asked to make some "more normal flavors" for my subsequent batches and I made some mint chip ice cream a few days later. The mint chip has been fully consumed, but there is still some bacon ice cream in our freezer. But its still good.

My most recent two batches were black raspberry ice cream. We had some neighbors that were moving away and our street was going to have a casual gathering to wish them well. My wife and I collaborated and she made a pound cake and I made ice cream to go on top and it was quite good! 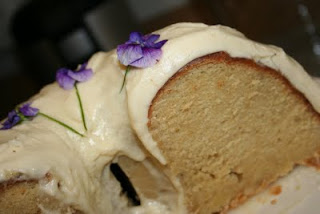 It seems that when I said "Please don't make bacon ice cream" what I actually conveyed was "Please post in detail about making bacon ice cream, with pictures." I need to work on my communication skills. :P

The mint chip and raspberry ice creams sound lovely but I am not converted to the bacon. Sorry.

In fact... this ice cream is DEAD to me!

@Amelia - You crack me up! Sorry, I had already made the bacon ice cream, just not documented it.

But bacon is good.